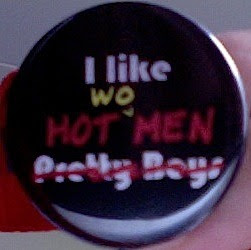 
My account of the first Yaoi Con I ever attended. I was super lucky, seriously. My plans were kaplunk and flat out begging for luck and the kindness of good people. I owe them a lot.
So, for my first Yaoi Con, I will skip over my elaborate scheme to run away from home for the weekend. It worked, thank god. Then I was super lucky to get a hotel spot for just Saturday night, kudos to the awesome president of AnimeFx. Unfortunately, I had no form of transportation due to lack of money. But, thanks to the last minute decision change of a semi-stranger, I was able to get a ride on Saturday after class!
Arrived at the hotel, checked in with Kevin, got the badge, dressed up. I cosplayed as Ritsuka from Loveless, another last minute decision. I really just pulled together jeans, a long tank top, Bast's cat ears/tail, and added white stripes on my sister's blue zip-up hoodie. The problem why I had a hard time was cause this, and just by depending on 1 missing clothing item, it could have been 3 people- Kouya (missing sweater), Ritsuka (missing jacket), or Miharu (missing pants). Ended up with Ritsuka cause I couldn't think of anyone else. Back on topic. After this set up, I'm just gonna go on with the rest of what I did.

Saturday (rest of it):
To be honest, I wasn't really expecting much- the yaoi mangakas/VAs I wanted to meet weren't guests, there was only 1 industry guest artist, several of last year's panelists weren't there, etc. I was at least hoping for there to be plenty of yaoi character cosplays. WRONG. I saw almost nill. Mostly Kuroshitsuji, Hetalia, and Guren Lagoon. I did manage to meet a Natsuo and some of her friends. We attended some panels and checked out the other events.
Two highlights- Yaoi Auction and the Rave. then we lined up to go to the Yaoi Auction. While in line, we got trolled by my own roommates :/ (Angry Bird, Brain Age guy). The Auction was rather entertaining. The process was that the boys being auctioned would perform a skit, song, dance, etc., then the hosts, Bishie Mama and her assistant, would begin the bid at $100. Whilst bidding, to egg on the audience, the boys would strip, piece by piece, or perform fanservice, like suggestive positions, groping each other if more than one boy, groping themselves, etc. Audience members who missed the price mark were also allowed to line up to tip the boy by stuffing dollars in his pants/boxers. (Some people even tipped Bishie Mama by tucking a dollar in her downblouse.) I primarily showed up to see how my club president and one of my hotel roommates did (name not released). He started off the section of awesome performances. (The previous were all rather meager, although some were hot, seemed like rookies.)