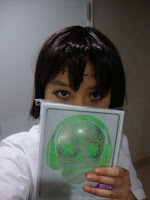 Extra: I finally decided to take a photoset of the contents here.
Now, I am NOT a hardcore fangirl of Big Bang so don't be uber offended by anything I say.

Little background. At Fanime 2011, Jpop vs Kpop Battle Royale panel, there was a Lucifer dance off between me and some other guy. I won (and looked stupid) and got a Big Bang special edition album. To be honest, the album wasn't that "special" to me, but the glory of winning and the potential that I may gain some attention was tempting. Now, don't get me wrong-- I personally REALLY loved the song, music video, and live performance of Big Bang's "Love Song". The live dance wasn't amazing, but their ninja dancing was eeepic. And the vocals were AWESOME.
Now the actual review.
I listened to ONLY the CD in my CD player. I did NOT look at English translations and did NOT bother with looking up who sang which parts or figuring out what the song meant. I ONLY focused on what I could hear out of my CD player.

Songs-
"Love Song": as I've said, this is a glorious, glorious kpop song. wonderful music. great even without the music video.
"Stupid Liar": hate to say it, and hate to use a lame pun, but this song was not only titled "stupid", it also sounded "stupid". the chorus was nasally and and every time they sang "stupid", it was accented(?) in a which that seemed retarded.
"Tonight": another beautiful song. (the music video for this one also happened to be shown at the jpop vs kpop panel) however, the chorus had too much autotune. and this sounds weird since i'm not a hardcore big bang fan... but TOP's voice was... interestingly distinct, very smooth, nice, and... seductive...

"High High": song title matches english lyrics and melody. the beginning sounded familiar, idk why. xD im not joking, but when they sang the chorus, it sounded like they were singing on crack. at some point, i think i heard someone say "ninja". the "hahaha" part made me think of "Yayaya" by T-ara. focusing on ONLY the "high high" song and ONLY the "yayaya" music video... they match. LOLZ. this song makes sense.
"Oh Yeah": hate to say this. the girl who was featured in it.... PWNED the boys. Her voice was really smooth, fluid, and beautiful to listen to.
"Cafe": made me think of tango music, idk why. TOP's engrish was lolz and his rap later in the song was, sorry, ew. Then I heard the high notes. holy shit. i thought Jonghyun was the only kpop guy I heard of that could hit high notes. whoever sang those high notes... YOU IS AWESOME. and the other person who sang english lines
"I Need A Girl": omfg Taeyang's voice is beautiful. i can't get the image of his current face out tho-- he looks gangster, but pretty voice. beautiful disconnect there for some reason. my only problem is when he sings "i love girls".... it just sounds really awkward and really forced. and unfortunately, it gives more hardcore fangirls... a really really tempting urge.
"Somebody to Love": decent song. omo TOP and taeyang(?)/seungri(?) sounded so breathtaking despite the autotune.
Song No. 9: idk what the title was since the box had it in Korean. sounded like a love song. the down-down-down-*down* part was cool, as was the clapping in the background. the autotune made one guy sound really weak, even though I know listening to the previous 8 songs they're better than that. oh but the really cool part was when the music suddenly went into a minor key during the bridge. aaawesome.
"Baby Don't Cry": loved the guitar intro. YAY! no rap! personally, i dont like rap in the middle of a song song. i kind of prefer them separated unless it works really well. in any case, sorry but this song was boring.

Rest of the "special album".
The case is REALLY cool. Probably because I have very few legit CD albums. The cover was also very fussy and very cool. More plastic and paper than actual music. An interesting facet thats closely related to the rest of the kpop world (variety shows and appearances anyone? big bang isnt excempt). Anyways the plastic cover was really annoying to remove and put back it. I also got confused the first time cause I didn't find the actual CD until I realized the side that said "Big Bang" could be pushed out like a drawer... where the actual CD was.... very cool.
Inside the top layer, there was a booklet of stuff, an ad for more Big Bang products, and a card thing in plastic that had Korean words on the back and TOP's face on front. ???
There was nothing else so I flipped through the booklet thing. The first few pages... first thing I noticed was how ugly their lips looked. Dry and chapped. gross. that is not something you put on kpop idols! especially not the front pages. Pg 17... epic typo lolz! Next to TOP's face was "I just wnat to hold you close to me." at first i thought the font was had a funny "h" but then i realized "what" didn't make any more sense. producers.... you failed. Pg 29- Taeyang's left had looked bloated :( Pg 33- gold lined sneakers! awesome! Pg 34- G-dragon's leopard/cow suit thing was pretty cool. and much better than SHINee's awful "Hello" leopard print clothes. Pg 48... loved this one. G-dragon's eye make up.... omfg AWESOME.
Then there was a page that said "special edition". Followed by... SKETCHES! of the Big Bang members! Prob was for several of the images, they looked so accurate I thought they might have just photoshopped it. I honestly couldn't tell if an artist really drew them that accurately or if it was photoshopped. except whoever was on pg 62. that person i couldn't even recognize. Pg 74- GD mouth looked super deformed. im pretty sure it was for sex appeal and to give him a manly image... but sorry, didnt work for me. and was seungri holding an invisible tie? Pg 76 spread- wtf Daesang's body looked super crushed and messed up. Pg 80- Taeyang's bubble... just... no words. No words. It looks far too solid. Which means they either had an awesome photographer, camera, or photoshop.
The cover of the booklet and the entire back was sort of mini-reflective so I could see myself kinda. And the front was skull-shaped, like the skull on plastic covering. Very cool.
So now, I just gave you want a non-fan's account of Big Bang's Special Edition Album... whose title I don't even know and isn't even on the album (unless there is no title).

The only thing I now can do is compare it to my only other full-length music CD album- Hacken Lee. An awesome Chinese singer. I have his "Hacken Lee's Concert Hall" album, and lemme tell you, its amazing. There are three CDs full of wonderful vocals (coff much more than 10 songs?) and a folded booklet. Emphasis on the music? Anyways, long story short, the font for both the English and the Chinese was really pretty, as was the rest of the album art. Hell, the CD art was lovely as well. Hacken was wearing this really awesome looking gold wing things. Adding onto the emphasis on music vs appearance was the fact that all album art was him playing the the piano, singing, an orchestra, or a stage. Yep. And he still maintained a highly stylish appearance.

Edit: LinzerdinzerTV also showed a comparison between American and Jpop CD albums. Jpop albums also had the DVD for music videos. That's even cooler.
Then, I realized I had another CD "album" (I think) that's classical American music. Well.... only thing I can say is that Asian CD albums look way cooler than American CDs... which are just a case... and a CD. And like, no stuff. ?

Now get jealous! Kufufufu.
In case you're wondering what the hell is the picture, I'm still in my Lulu Bell cosplay after I returned to my hotel after winning the album. Very heady experience. And I looked like a douchebag TT_TT
Now I feel like I cheated a bunch of Big Bang fangirls >.>